I decided to see if BlackBerry had solved their install problem with the Desktop Software version 6 that I tried to install back in September 2010.  I’m sad to say their software is full of FAIL still. 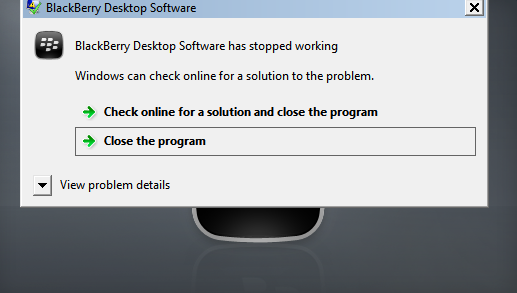 As you can see from the errors above, you can’t even launch the application.  It makes me wonder if programmers at RIM even QA their software at all.  I’m not the only one having this problem either.

I could go on and on but I figured I’d need to stop somewhere.  It’s pretty bad.  It seems users have been reporting this even a few months before I tested it out in September 2010…so this problem has been around for more than 6 months and RIM hasn’t done anything to fix it…and they wonder why Android is chewing up their market?

The worst thing is that when googling around this particular error…you find it is a simple fix in .NET framework inside the application and the app just needs a reference fixed and a recompile.  Figures.  Something that could be done simply and quickly to solve pain and suffering of many goes unnoticed…but hey, let’s make sure we make big bucks on everything else!!

Bottom line is…I have to revert back to previous version.  This means I can’t update my BlackBerry and I can’t call customer service because they won’t help me unless I’m running the most recent version.  So at least they have THAT going for them…they don’t have to address any concerns about BlackBerry Desktop Manager 6 because they can just ignore people that call in that aren’t running that version of the software…and since the people CAN’T get to that version, they get lost in the void.

Hat’s of to RIM!  They’ve cooked up a good way to ignore people in this case.  I hope they fix their problem sometime in the next 6 months.